Within the IAGOS program, an Air France A340 has been successfully equipped by the CNRS technical team lead by Philippe Nédélec (pictured below). This aircraft has been delivering IAGOS data since June, 15th 2013. As planned, this new member of the fleet is sampling the atmosphere on routes towards West Africa (data recorded during the flight Paris-Niamey are presented in the figure below) and the Caribbean departing from Paris Roissy-CDG. The link between Air France and IAGOS is almost 20 years old as this company was previously involved in the MOZAIC program with one aircraft in operation between 1994 and 2004. Thanks to the agreement of transporting the equipment free of charge, the participation of Air France is essential in helping the IAGOS program reach its desired (spatial and temporal) global coverage. This is the third aircraft to be equipped after an A340 from Lufthansa in July 2011, and an A340 from China Airlines Taiwan in July 2012. An A330 from Cathay Pacific is scheduled for July 2013 and an A340 from Iberia for October 2013. 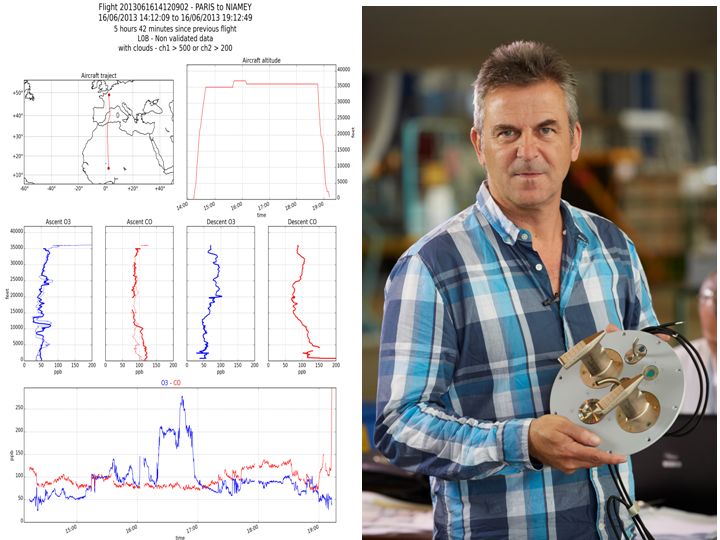 Figure : Quicklook of the data recorded during the flight Paris to Niamey on June, 16, 2013. Vertical profiles of ozone (in blue) and CO (in red) during ascent and descent along with the time-series at cruise altitude are plotted with the flight-track and altitude.

Photo : Philippe Nédélec holding the inlet plate with the IAGOS probes just before installation on the left side of the fuselage of the aircraft (small photo inserted above).